She’s 12 years old. She is a ball handler for the 2016 champion All Saints Catholic School Eagles basketball team. She can fish with the best of the boys.

And, she is the youngest female kiteboarder on Jupiter Beach.
She’s Julia McGrath.   Girls can do anything … 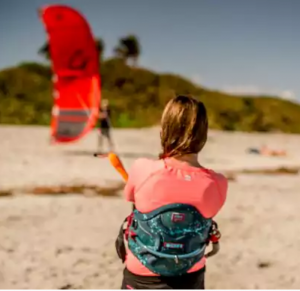 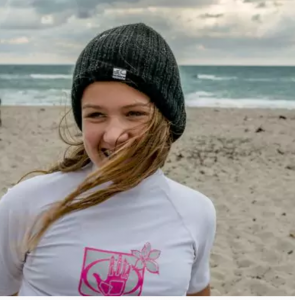 Read this awesome story on TCPalm

Kiteboarding, a traditionally male-dominated sport, lacks young girls because of the perception that it is a dangerous sport, according to professional kiteboarder Melissa Gil.

“Unless you actually know about kitesurfing, a lot of people find it to be out-of-reach, very hard to do, and honestly scary,” she added.

“Yes, the sport requires instruction and it is an extreme sport, but often the perception is a bit skewed. So, it is understandable that for parents that do not do the sport, having their child kitesurfing is a definite ‘no.’ Aside from the danger of it, the sport can be expensive.

“We would love to see more young riders, because they are the future of our sport and the ones that will push the limits even further. I believe as our kitesurfing community grows so will the young riders grow. We are starting to see already a lot more young faces on the beach, and as expected they are the sons and daughters of kiters that have passed down their love of the sport.”

Watching her father and brother

Julia grew up watching her father and brother kitesurfing every day, and naturally gravitated toward the sport herself.

“I went with my dad every day after school because I wasn’t allowed to stay home alone. I watched them kite every day and I started getting interested in learning” she said.

A tomboy at heart, Julia has never let stereotypes define her. She is quick to say that girls can do anything they want in life if they are wiling to put the time in to learn. Admitting there were days she would tell her father, Jim McGrath, that she didn’t want to kite, she usually changed her mind once she got to the beach.

Jim McGrath’s bond with Julia only grows stronger now that she is also kitesurfing.

“As all fathers will say, daughters are special, and my relationship with Julia is indeed special,” he said. “She is just a really neat girl, mature, smart, witty, funny and kind. Many times, her mother (Jennifer) and I were surprised to hear that she had sent a text or message to someone she heard was facing a struggle of some kind in their life. She doesn’t ask if she should do it, she just does it on her own. Its so genuine! I just feel like she really cares and is not afraid to show her feelings and express herself.”

Aside from her interest in kiteboarding, Julia says she really loves fishing! All kinds — but mainly snook and bass, her dad says.

“She has so many close friends, mostly boys like Zach, Jackson, Nick, and Sam. A couple of them are really into fishing and think it’s cool that a ‘girl’ enjoys it and is good at it,” McGrath said.

“She recently asked me to sit down and show her my favorite fishing knots. She also enjoys basketball, skateboarding and softball. I have really enjoyed the last few years especially! She is at a really great age and I love spending time with her, whether it be out in our flats boat or working on her kiteboarding.”

Julia’s dad is not only her friend but her mentor, and she describes him as high-spirited and “… so cool. He’s always happy. I’m so glad I have this dad because I would not be fishing and kiteboarding if it weren’t for him. We have a great relationship,” she said.

Began with the basics

Teaching Julia to kiteboard began with the basics — a trainer kite.

This is a bar with two lines connected to a foil kite, allowing the person to learn the feel of a kite and make adjustments according to wind speed and direction. When Julia was comfortable with the trainer kite, she began practicing body dragging in the water.

“This was pretty cool,” she said, describing the feeling of being in the water with one hand on the bar and one gliding through the water. She practiced diving the kite as it pulled her through the water and continued to do that until she was ready for the board.

Julia is also a surfer and skateboarder, and she said she believes this helped her once she got on the kiteboard. Unlike skateboarding, when you are still but bend your knees, kiteboarding is about foot placement and much more like surfing.

With the encouragement of her father and brother James, she continued to learn how to fly the kite, recalling a time in the beginning when her kite crashed and “they had to swim out and help me back in to shore,” she said.

“James is a great brother for coming out to get me. We can be fighting one minute about silly things like who lost the remote and then laughing about it the next. I know he’s got my back out there, though.”

James, 17, who is a team rider for Cabrinha Kites, is impressed with how Julia is learning the sport and happy to be able to share the same love and passion for the water he has “from kiting, surfing, fishing, wake boarding and diving. It is an indescribable feeling watching your younger sister take off in the water,” James said.

“It truly does bring back many memories from when I was in her shoes, because I was the same age as her when my dad introduced the sport to me. It really brings a smile to my face when I see the same expression on her face as the one I experienced. She is going to be one amazing athlete,” James said.

Julia’s defining moment was getting up on the board and staying up.

“It just clicked and everything I had been practicing came together. That was the best day of my life,” she recalled.

“It’s hard to explain the feeling of freedom and flying over the water. And, I am learning a lot about nature being out there. I’m not scared. If you’re comfortable in nature and respect being around large fish and sharks, they won’t interfere with you. I glide right over them and they swim away.”

Practicing on Jupiter Beach allows Julia to be around some of the world’s best kiteboarders like Gil, Damien Leroy and Jon Modica.

“It’s always exciting to see a young girl get hooked into this great sport,” Leroy said of Julia.

“She is a tomboy at heart but truly a princess. Whatever the guys are doing, so is Julia. I had been traveling for a few months and came back to see her riding on a kite. It didn’t take her long. She is a super talent-in-the-making and has the passion to one day spend her life traveling the world and experiencing the most beautiful beaches.

“Kiting has been predominantly known as a male-dominated extreme sport, but things are changing as more women, girls and kids get involved. It’s very safe and a perfect lifestyle for kids. The truth is, the girls and kids draw more people into the sport.”

‘Outdoors is her life’

Julia believes girls can do anything if they fully commit, saying that her mother taught her this.

“She taught me pretty much everything else. She was just like me when she was a kid, and loved sports. I’m sure if she was me she would be kiteboarding, too. We do a lot of activities together, and I just got to take her on a boat ride because I just got my boater’s license.”

Jennifer McGrath proudly says of her daughter, “That fact that she is following her big brother’s footsteps all on her own is so much fun to watch. What I love about Julia the most is that she’s such a tomboy but also a beautiful girl! I love her sense of adventure and the love she has for the outdoors. She rarely watches TV and is not one to play video games.

“The outdoors is her life, and kiteboarding has now become a new-found love. I can’t wait to see how far she will go with it. She’s a natural on the water — fearless! Look out world — here comes ‘Baby Girl of the Super Star World’ (a nickname her dad gave her).

“I just wish I could get her to wear a little pink!”

When asked what’s next for the young athlete, Julia said she wanted to be really healthy.

“Even though I am, I want to stay that way — because if it goes downhill I would regret it,” Julia said.

She works out daily doing crunches, stomach and bicep work and believes in eating well and avoiding junk food.

With girls like Julia entering the sport, Gil stated that she is amazed by what they are accomplishing.

“The level today of women in competition is incredible, and there are so many talented and dedicated women pushing the sport to higher limits,” Gil said.

“I never give up. I am fully committed. That’s how I feel about everything in life,” Julia said.

I had taken some lessons in Aruba before meeting Gerhard in Toronto, but I didn’t have the confidence to get my own equipment and take kiteboarding to the next level. Gerhard helped me get there (...)

I always wanted to try kiteboarding but never found a way to go for it so when I met Gerhard through a friend of mine and he suggested I will check it out I was immediately in.
Hands down Gerha (...)

I had about 9 hours of lessons in all types of conditions and progressed rapidly throughout the lessons due to Gerhard's ability to identify my problems and teach me how its done, It was also a (...)

I had amazing kite lessons with ukiteboard. Gerhard took care of picking the right day with suitable conditions and made sure we went to a safe, beginner-friendly spot. Setting up the gear and a (...)

Took many lessons with other people before meeting Gerhard. He helped to transition me from riding with an instructor to by myself. He's a great guy and is very reliable/ dependable. He teaches (...)

Thank You for showing me the way!
Fred

I have had the privilege of learning how to kiteboard with ukiteboard with instructor Gerhard. ukiteboard has changed my life forever by giving me the knowledge and confidence to progress in to (...)

My instructor Gerhard Marsch was an absolutely amazing instructor both on land and in the water. We were able to work through all the safety, kite rigging, launching the kite and riding. He even (...)

Drone video was taken of Gerhard on last year's trip. It gives you a good idea of what the area looks like from a bird's eye – or actually a drone's view!

Signup to our newsletter

COME KITE WITH US!

At ukiteboard we teach and coach kiteboarding (a.k.a. kitesurfing) and snowkiting.

If you’re not familiar with kiteboarding (a.k.a. kitesurfing) or snowkiting, it’s a sport where you speed over water or snow using a kite to harness the power of the wind and a board as a floatation device and in the case of snowkiting, you’ll be riding your skis or snowboard. Summer or winter, it’s incredibly fun!

Drop us by email or fill in the BOOK A LESSON FORM and we'll get back to you to schedule your kiteboarding or snowkiting lesson.